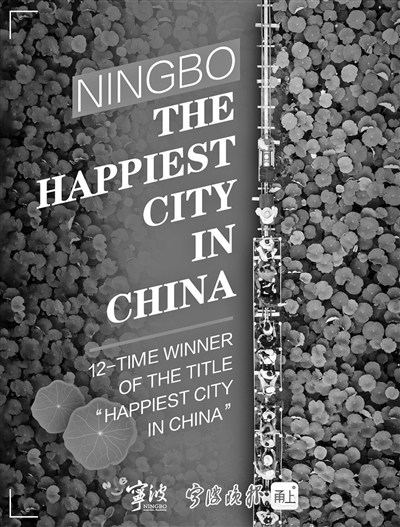 ЎЎЎЎNingbo was rated as one of the happiest cities in China in 2021, according to the Happy Cities of China Forum recently held in Beijing. This coastal city was ranked third among provincial capitals and cities with independent planning status nationwide, and it is the 12th time for Ningbo to be selected in this ranking.

ЎЎЎЎFor its strenuous efforts in building up a prosperous society with a higher sense of gain, happiness and safety, Ningbo received numerous compliments in this forum.

ЎЎЎЎThis can be seen in the praise of Feng Yingbing, secretary of the Party Committee and editor-in-chief of Outlook Weekly (Liaowang Zhoukan). "Ningbo sets a good example throughout the country of constructing a well-governed city. It starts with accommodating citizens with resting places in public recreation areas without any hygienic concerns; fastidious in this work, the city succeeds in forging a harmonious and pleasant habitat.Ўұ

ЎЎЎЎWhen interpreting the "2021 China Happy Cities Report," Su Huizhi, member of the Standing Committee of the Party Committee and deputy editor-in-chief of Outlook Weekly, emphasized sustainability and the development of happiness in cities. Cities such as Chengdu, Hangzhou, and Ningbo have consistently been ranked as the happiest cities in China. Among the listed provincial capitals and major cities, the top 3 happiest cities in China in 2021 are still Chengdu, Hangzhou, and Ningbo.

ЎЎЎЎIn the currently most authoritative and influential ranking of its kind across China, the cities were selected by Oriental Outlook magazine and the think tank Liaowang Institute, both run by Xinhua News Agency.

ЎЎЎЎThemed "Happiest Cities on the 100th Anniversary of the Founding of CPC", this yearЎҜs survey and selection focused on presenting Chinese citiesЎҜ achievements in people-centered and high-quality urban development.

ЎЎЎЎNotably, the 2021 ranking highlighted the happiness of entrepreneurs as another vital index to explore the urban gene of nurturing individual manufacturing champions and unicorn enterprises and figuring out the driving force of harmonious relations between entrepreneurs and cities. Among the honored places are Yinzhou District and Cixi in Ningbo.