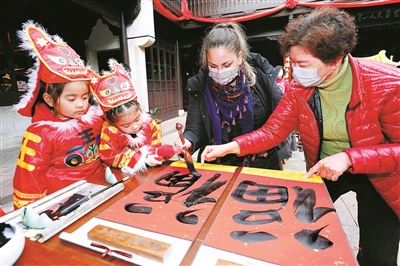 Expats get a hands-on experience on Spring Festival couplets in Zhenhai. [Photo by Tang Yan]

The Spring Festival is around the corner, and the coming year will be the Year of the Tiger. A variety of celebrations were held throughout Ningbo to welcome the upcoming Chinese New Year, attracting many people to participate.

On January 18, in Zhaobaoshan Art Villa, Zhenhai District, 16 foreigners, together with vivacious local kids, got the chance to experience Ningbo's traditional way of celebrating the Spring Festival.

Lanterns and Chinese knots were hung on the roof, and the whole yard was decorated in festive mood. Embroidery, paper-cutting, lithograph, and Chinese calligraphy...local craftsmen had prepared all the tools and materials needed for the traditional activities and they combined the complex operation with simple but sincere wishes, creating masterpieces related to "»¢", the Chinese character for tiger, and undoubtedly caught the attention of everyone.

If interested, guests could have a try on their own. Loko, a Canadian expat who lives in Ningbo, took the challenge and tried to make a tiger-head shoe after a local master. The tiger-head shoe is one of Ningbo's intangible cultural heritages and a common symbol of health and good luck. "Although difficult," said he, "such handicraft is more like a culture carrier, containing people's beautiful wishes and positive attitude towards life." He also mentioned the commonalities between his hometown's customs and those of Ningbo.

After the fun of handicraft, it was the time for snacks. Among all the traditional snacks like gold-balls(½ðˆF), rice cakes, spring rolls, and sweet dumplings, the sugar-painting became the eye-catcher. Sweet sugar was melted and turned into shapes of animals, which made the air smell sweet as well.

A coastal city as Ningbo is, it enjoys a reputation for its fresh seafood. Sitting around the table, foreign guests and local kids enjoyed themselves and tasted the most authentic Ningbo New Year's meal.

Held around the City

Making salted vegetables, rice cakes… Recently, more than 20 foreigners came to Dongwu Town of Yinzhou District to participate in the activity "I'm spending the Chinese New Year in Ningbo". At the Museum of Salted Vegetables, foreigners learned how to make salted vegetables and had fun stepping on vegetables while wearing shoe covers. Then they went to Tiantong Old Street to experience the local intangible cultural heritages and Maritime Silk Road culture with the villagers.

This event has been held for eight years. Every year, foreigners who live and work in Ningbo are welcomed to visit local villages, experience local traditional culture, and participate in cultural activities in an innovative way, so that they get the chance to tap into the important measures Ningbo has taken on to promote rural revitalization and intelligent construction and their results.

In Dayan Town, Fenghua District, the villagers set up a festival market near the Zhenting bridge, allowing tourists to feel the lively and traditional atmosphere of the Chinese New Year in advance. Local pork is a must-have item on many people's New Year shopping lists. Pork in Dayan is raised by the villagers themselves and is fed with radish, green vegetables, and beans. In addition to local pork, there are other specialties in the market too, such as rice noodles.

As the Spring Festival approaches, flowers become one of the popular "New Year goods". Recently, flowers are in full bloom at the Tiansheng Flower and Bird Market in Haishu District. Wu Jinbiao, the owner of a flower shop, said that the days before Spring Festival is the best time of year for business in his shop.

"There are thousands of different kinds of flowers in the store, including hundreds of moth orchids, which are also the best sellers, with prices ranging from 120 yuan to 3,000 yuan per pot. 30,000 plants are expected to be sold in the month before the Spring Festival. "With the improvement of living standards and the growing demand for flowers, sales have increased at least 10 percent in the month before the Spring Festival on average in recent years," Wu said.

Booking take-out package, or purchase prepared dishes and quick dishes, is becoming a new choice for Ningbo people to enjoy the New Year's Eve dinner. For example, starting from January 11, the Dongfuyuan Restaurant specially launched two New Year's Eve dinner packages, including smoked fish, plain chicken, seafood soup, yellow croaker with salted vegetables, and other dishes. Clients are required to order a day in advance, and they need only simple processing to serves the dishes with their family after taking the package home.

Some fresh food e-commerce platforms have also prepared the New Year's Eve dinner menu, as well as the corresponding ingredients for customers. People don't need to worry about what dishes they could prepare for the Spring Festival. They just need to place an order on the platform to buy corresponding ingredients and cook according to the recipes provided by the platform to complete a rich New Year's Eve dinner.